Skip to content
HomeWeekly Activities: Fish In A TreeFIAT Week 3

We read this article ‘Understanding Dyslexia‘  from Kids Health and were surprised about the facts and misconceptions about dyslexia. Dyslexia has nothing to do with being smart! There are so many brilliant and creative famous people (like Ally) that are plagued by dyslexia.

Then we reflected on how it difficult it would be to read (the yellow picture) for someone with dyslexia. 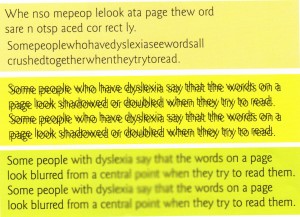 Activity: Based on the article “Understanding Dyslexia” as well as the video and picture above, do you think that dyslexia is misunderstood? Use evidence to support your response.

Let’s include our voices this week in our responses. You can use one of the following apps or introduce the participants to one of your favourites.

Suggested apps:  Write About This, Explain Everything,

When I went to the conference I was introduced to the idea of Lipograms, something I’ll admit I had never heard of. A lipogram is a constraint that is used when writing and can often be developed as a task for deepening the challenge for higher attainers.  The concept is very simple: a piece of writing is produced in which a particular letter is omitted. The example we worked on during the course (and I tried out with my class on return to school) was of Humpty Dumpty, rewritten without the use of the letter a.

Here’s an example from Billy Miller that I will use with my class (differentiated to accommodate the ability of my students).

(The quality of these pictures is better if you click on them – I couldn’t open the file on my iPad as the font was different!)

One thought on “FIAT Week 3”